Fireworks of Youth and Tradition Fly.
The “song” bar.

What is a folk song bar? 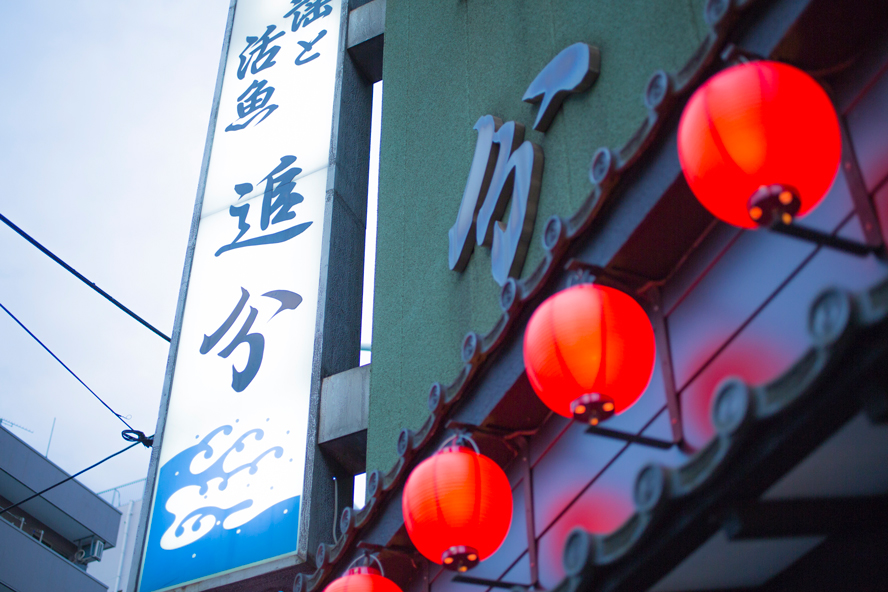 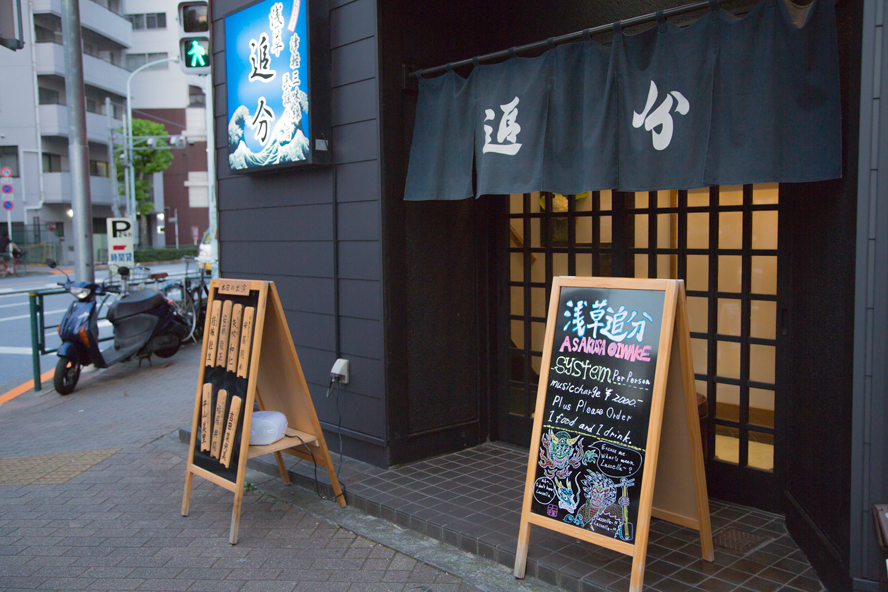 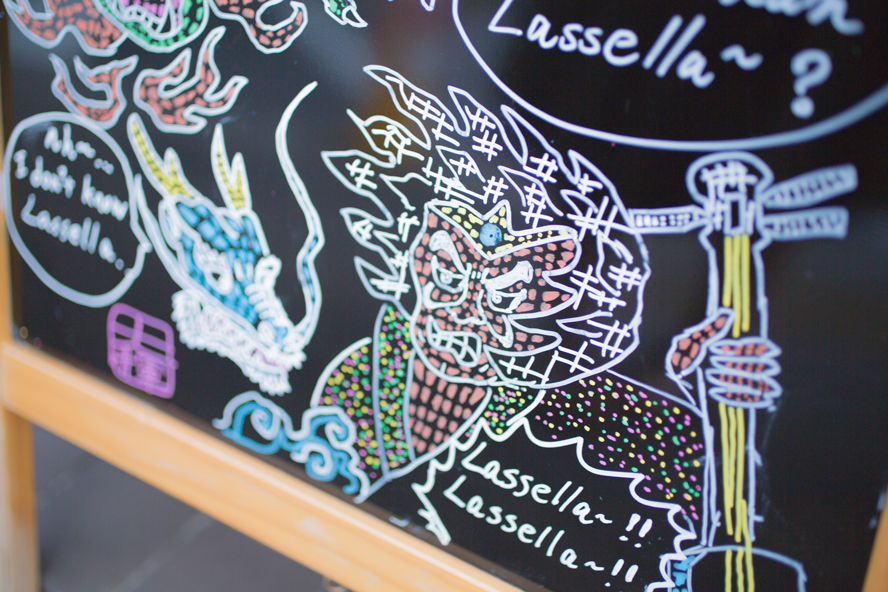 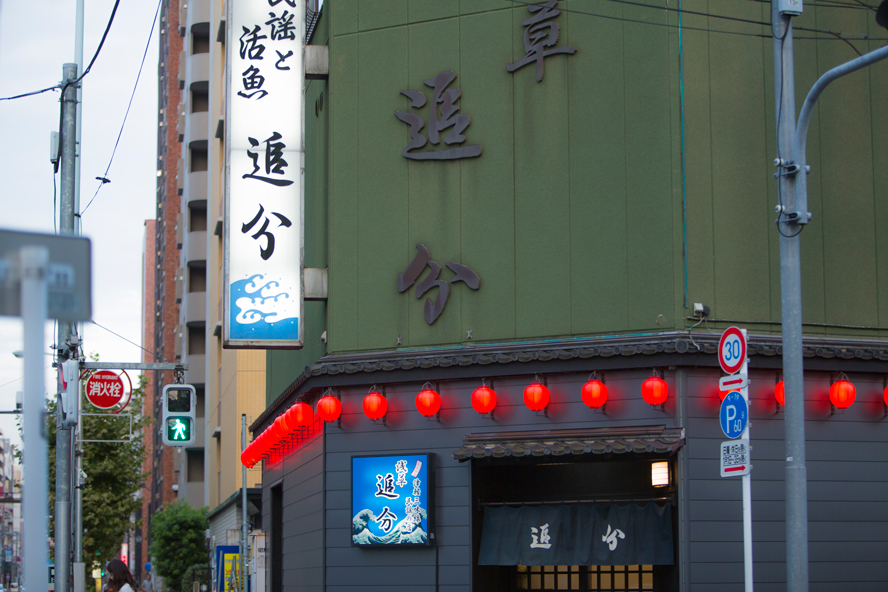 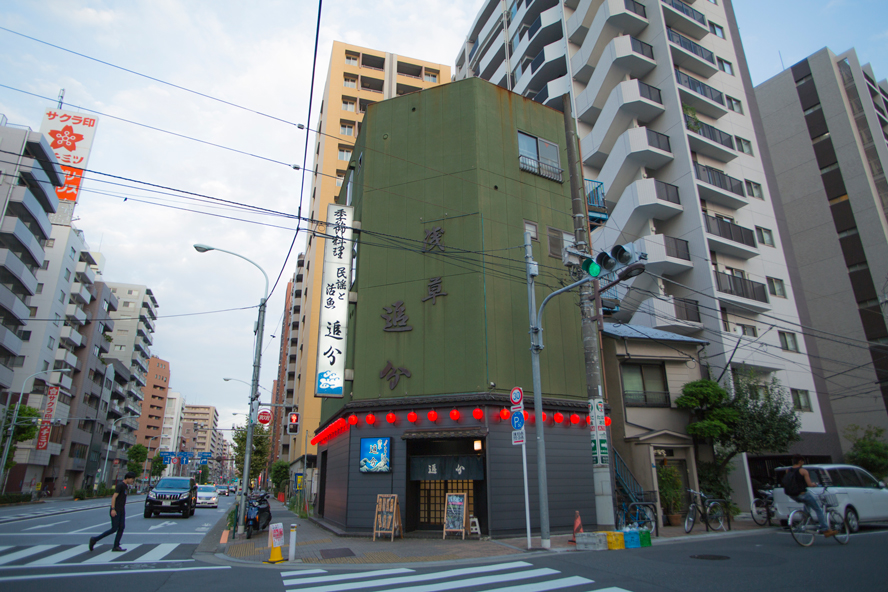 Have you heard of a “folk song bar”? It originated in a bar in the Yoshiwara area where the folk songs from all over Japan continue to be sung. During a long period of high economic growth, they eased the homesickness of young people who had moved to the capital and praised prosperity. While now there are only a few of these bars left in the Asakusa area, these bars have dedicated fans and performers who help them thrive with their enthusiasm. In this issue of EdoNote we will visit the pioneer spot of these “folk song bars” – OIWAKE – and introduce it to you.

What is the “folk song bar OIWAKE”?

Go through Kaminarimon and pass Hanayashiki behind the main temple, come out on Kototoi road into and head towards the Yoshiwara area where you can see the bar right in front of you.

At night the road is lit by only a few red paper lanterns, but you will be given a hint of what the heat of the stage is like. The bar name is OIWAKE.

OIWAKE was established in the year of Showa 32. It is the folk bar in Tokyo with the longest history.

The older brother of the senior hostess started the history of OIWAKE with the second Kiichi Hamada who is a expert of Esashi Oiwake (Hokkaido folk song).

At that time, it was an era when the groups of graduates who came looking for work in the capital yearned for their hometown spent their time in folk song bars.

Since the senior hostess was around 21 years old she has been managing the folk song bar until this very day, she is called Akiyo Hattori. 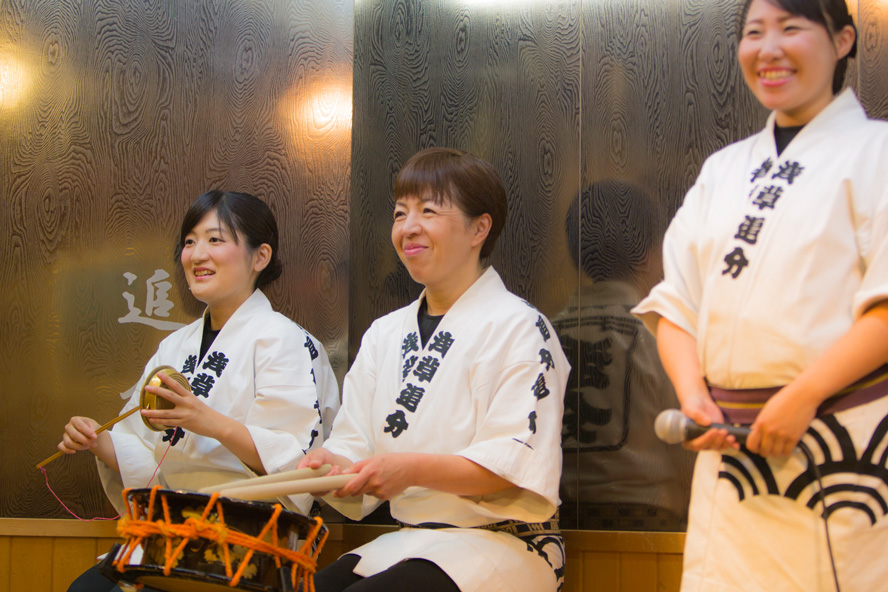 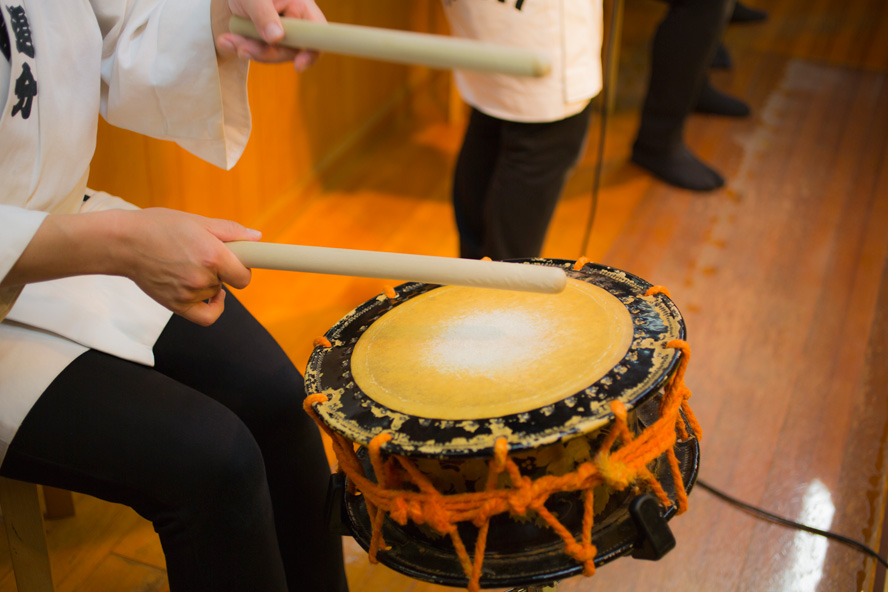 “It has probably been about 30 years since the building was reformed to look like this. Before that there was a stage and customer seating on the 1st floor and the 2nd floor was where the families of the performers lived.”

At OIWAKE, more than 10 professional performers and performers aiming to be professional are always registered. It is the gateway to the folk song world and a nest where many entertainers grew up.

The eldest of the Yoshida brothers, whose name is known nationwide, Ryoichiro Yoshida trained at this very bar. 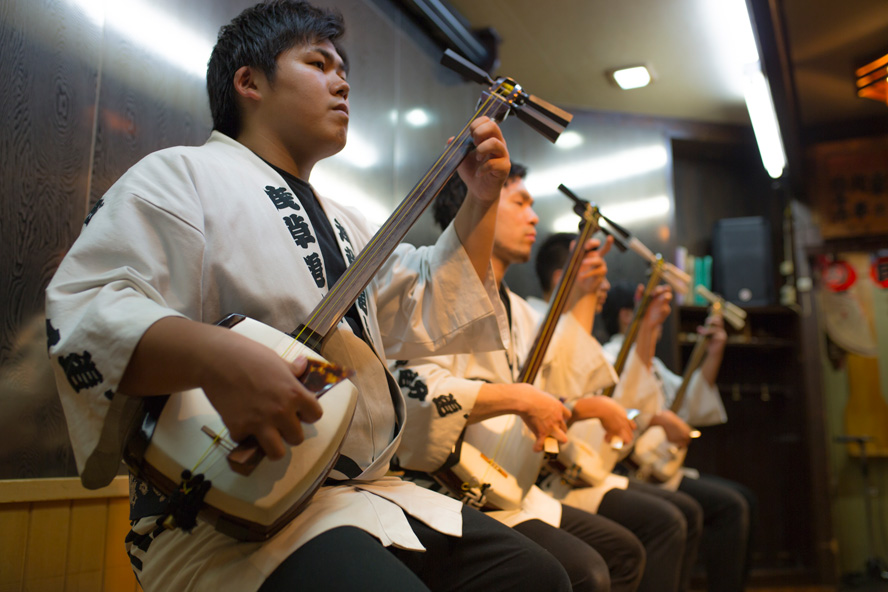 The highlight is when the Tsugaru Shamisen players line up and play together. 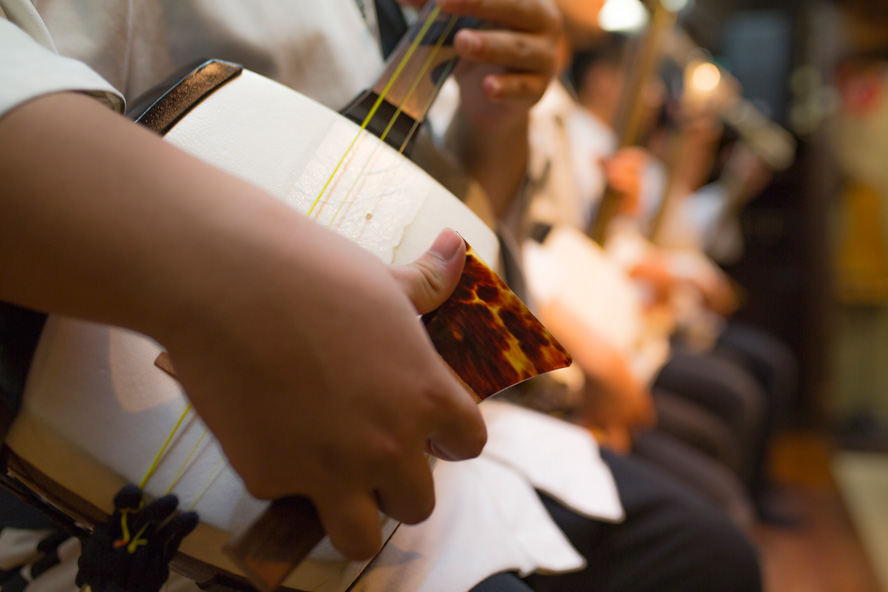 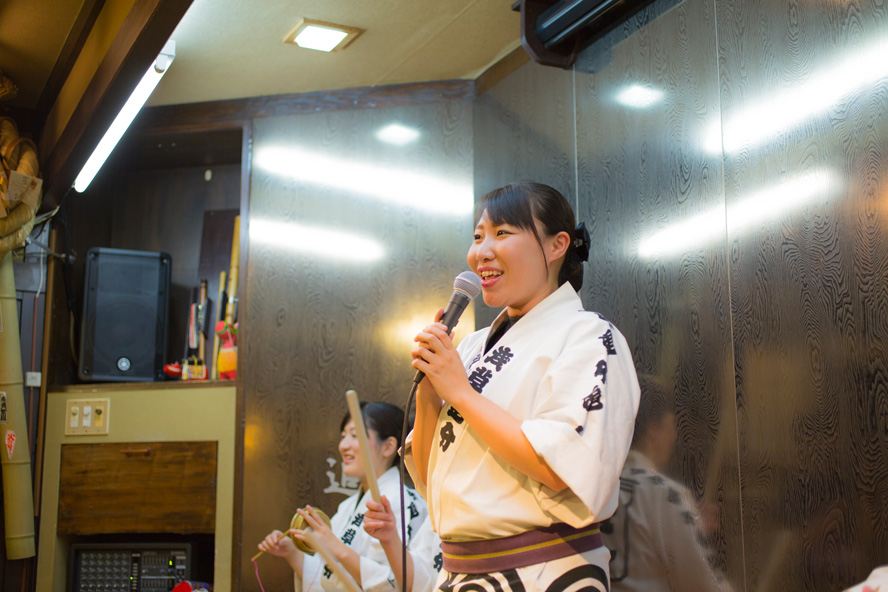 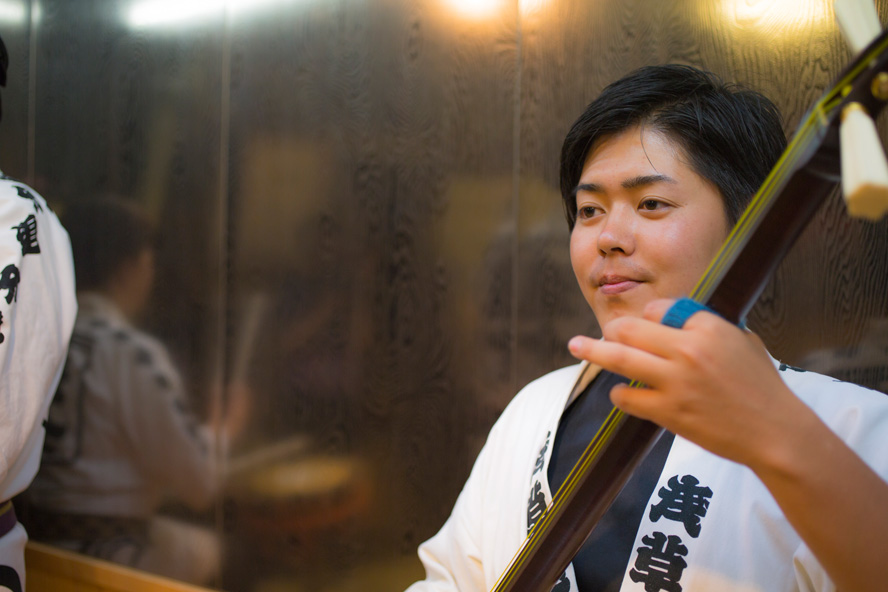 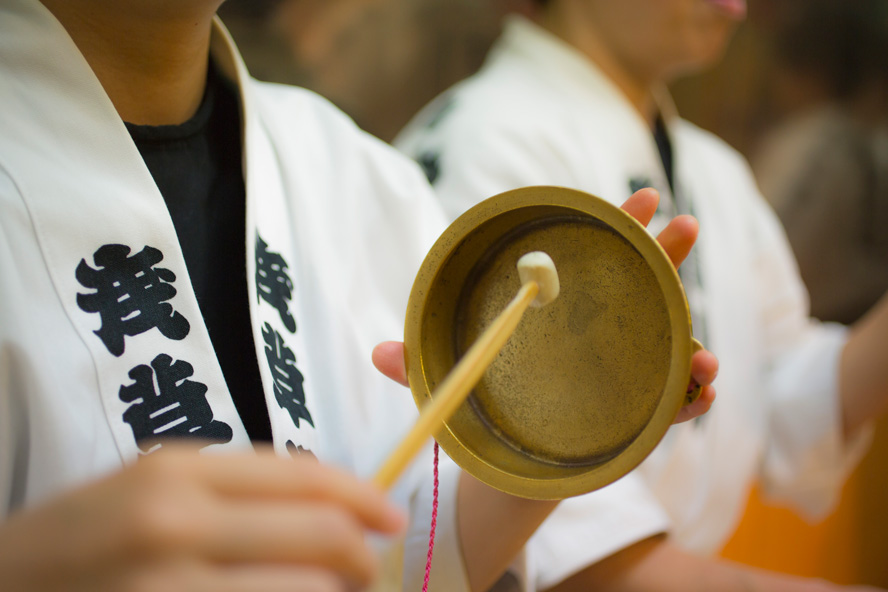 The OIWAKE stage is performed twice a day at 19:00 and 21:00. You can enjoy the live house music performance while having a meal. There are over 100 songs in the repertoire.

“Each performance lasts for about 40-45 minutes and starts with a folk song followed by dance, Qian Taiko drum and Tsugaru Shamisen. We try to perform songs that originate from the birthplaces of the customers that have come to the bar that day.” 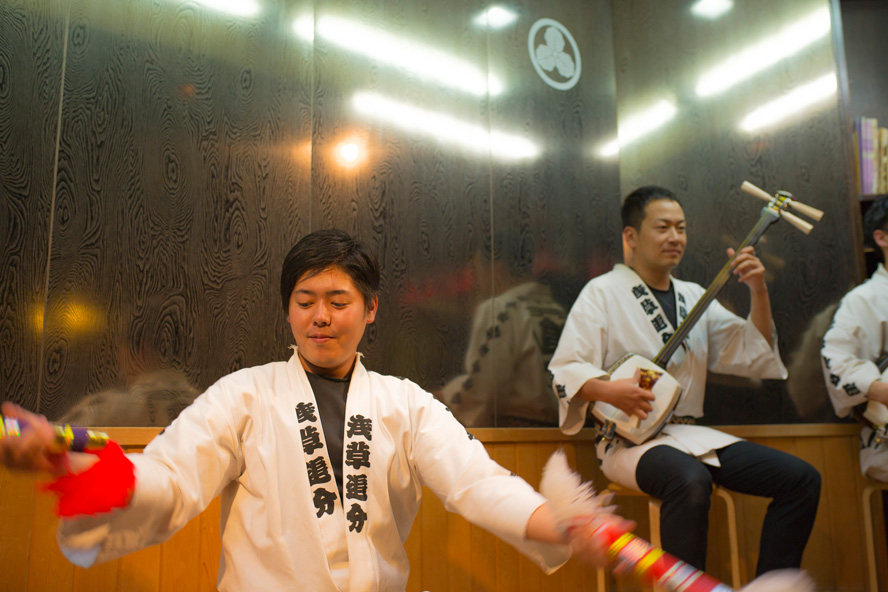 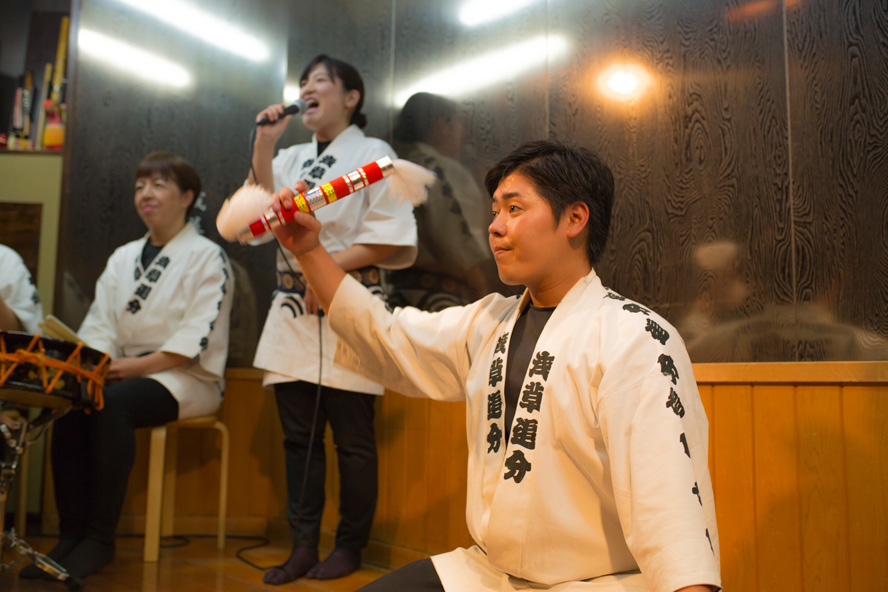 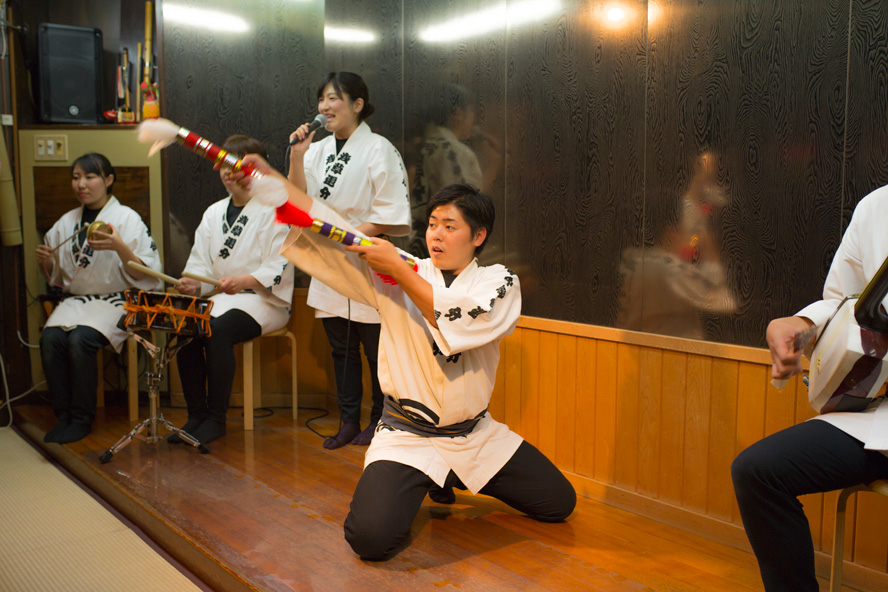 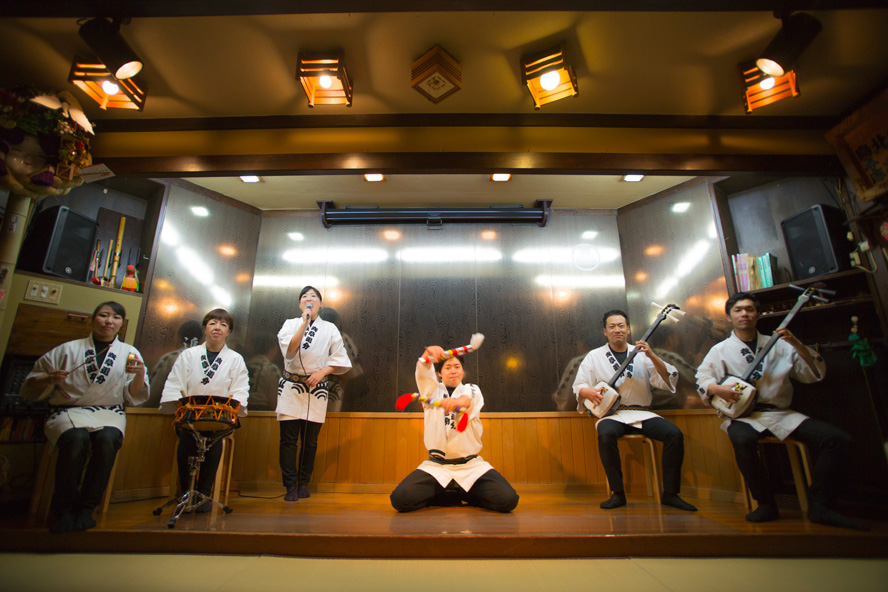 “There are many cases where customers come from abroad. So at these times we try to do hand clapping songs such as Hanagasa Ondo, Tokyo Ondo and Soran Bushi (famous and easy to understand). There are many customers who enjoy songs where they can call out.

There are many people who are familiar with folk songs and a customer from India who is over 80 years old tends to sing along. There are also quite a lot of young people.” 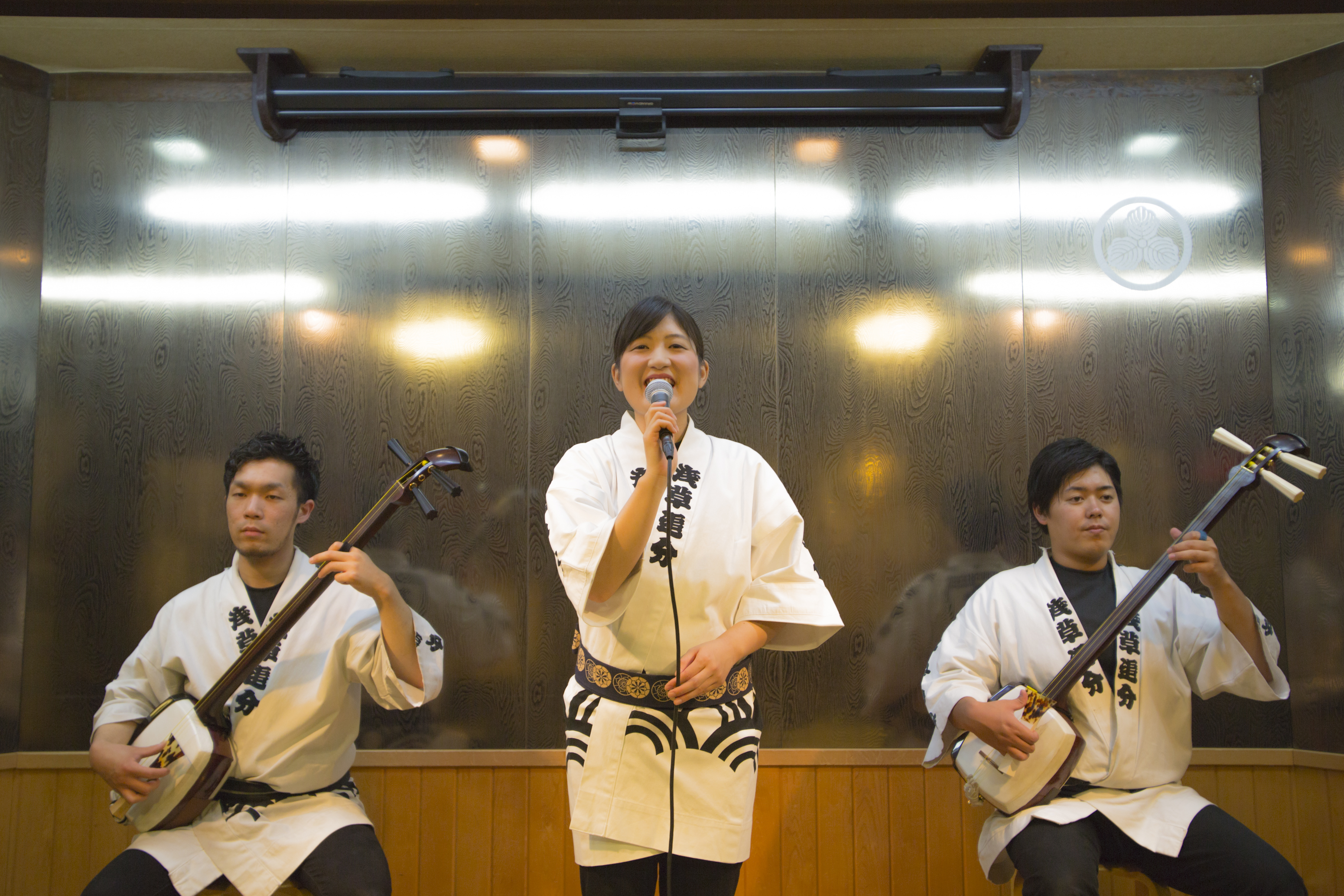 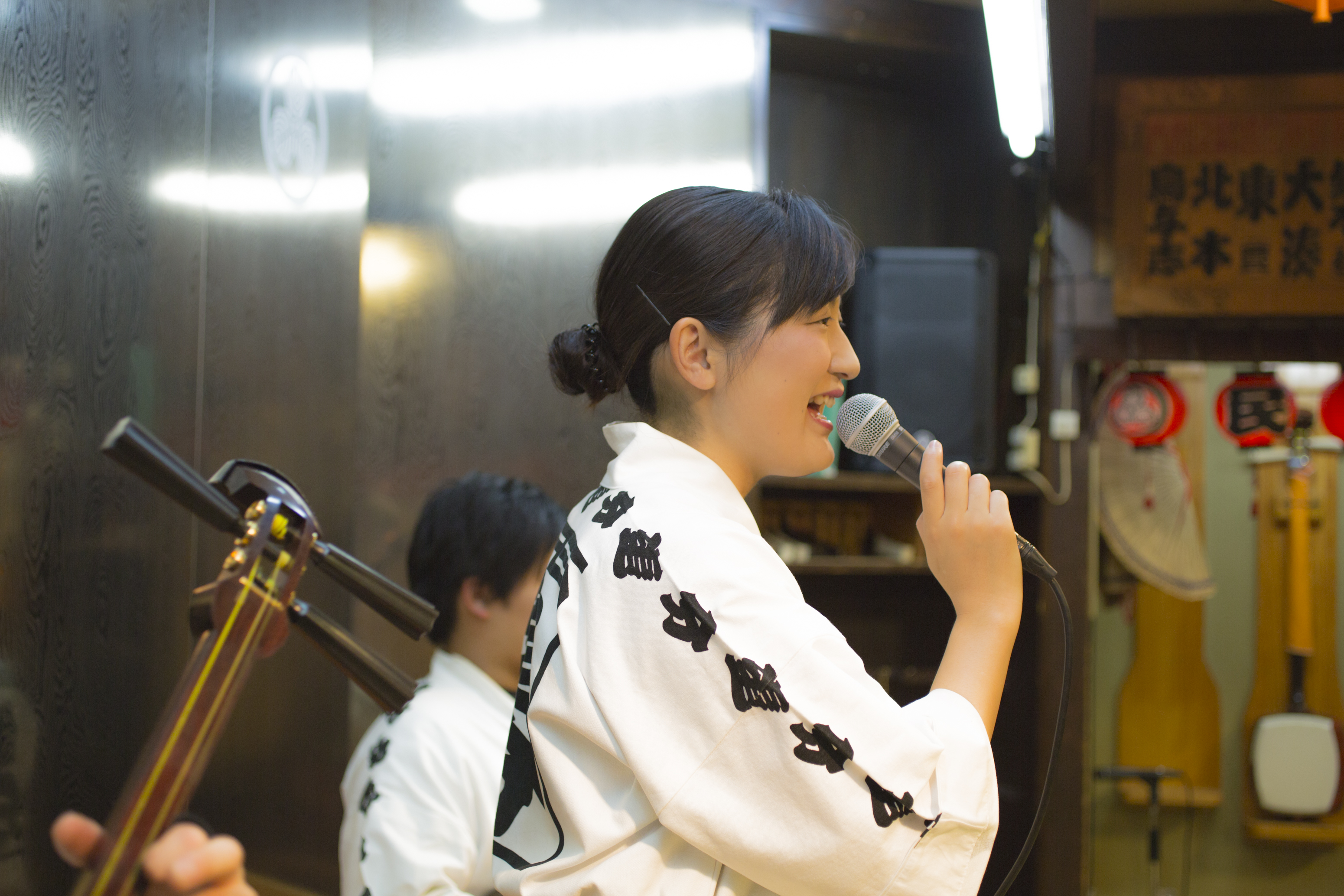 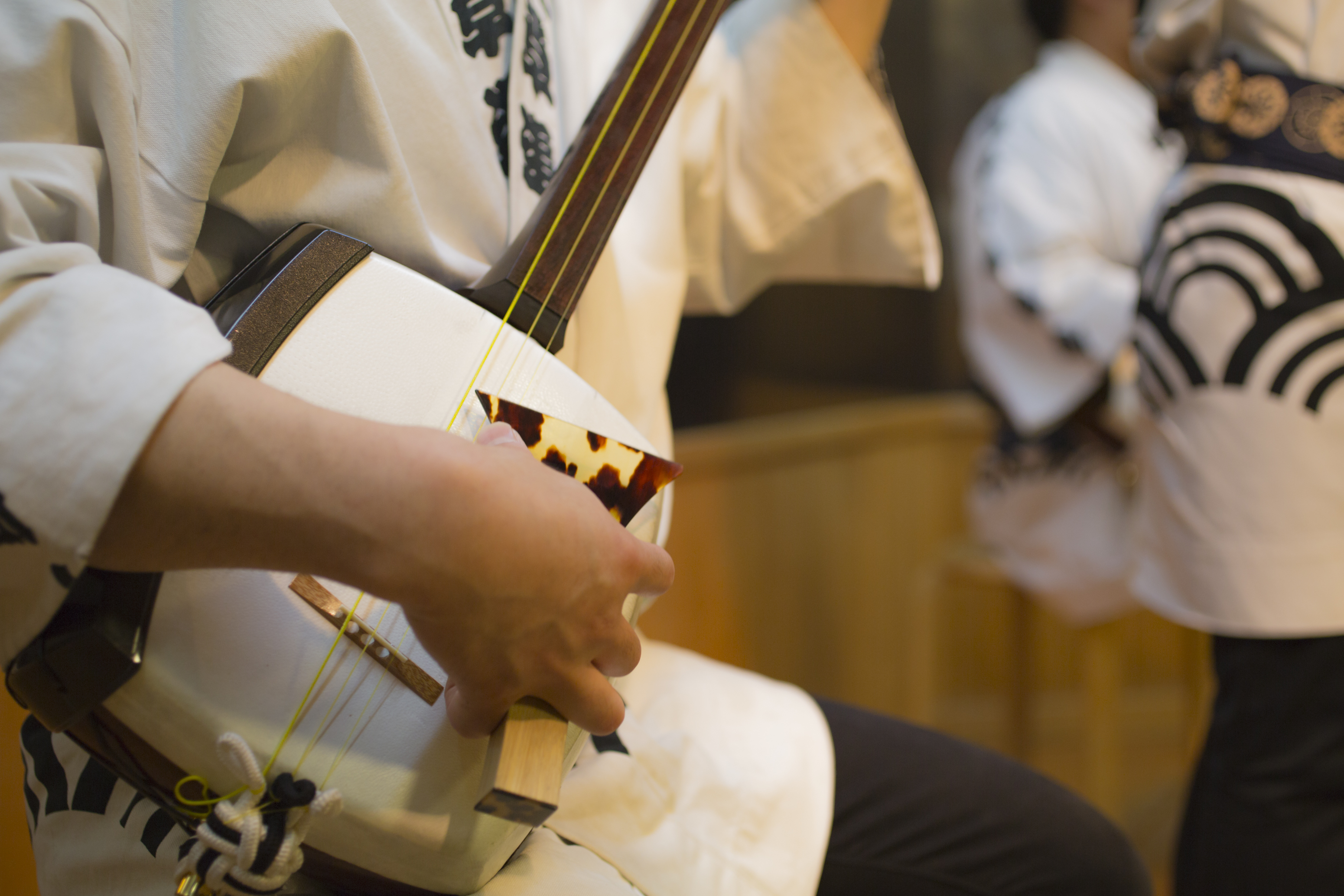 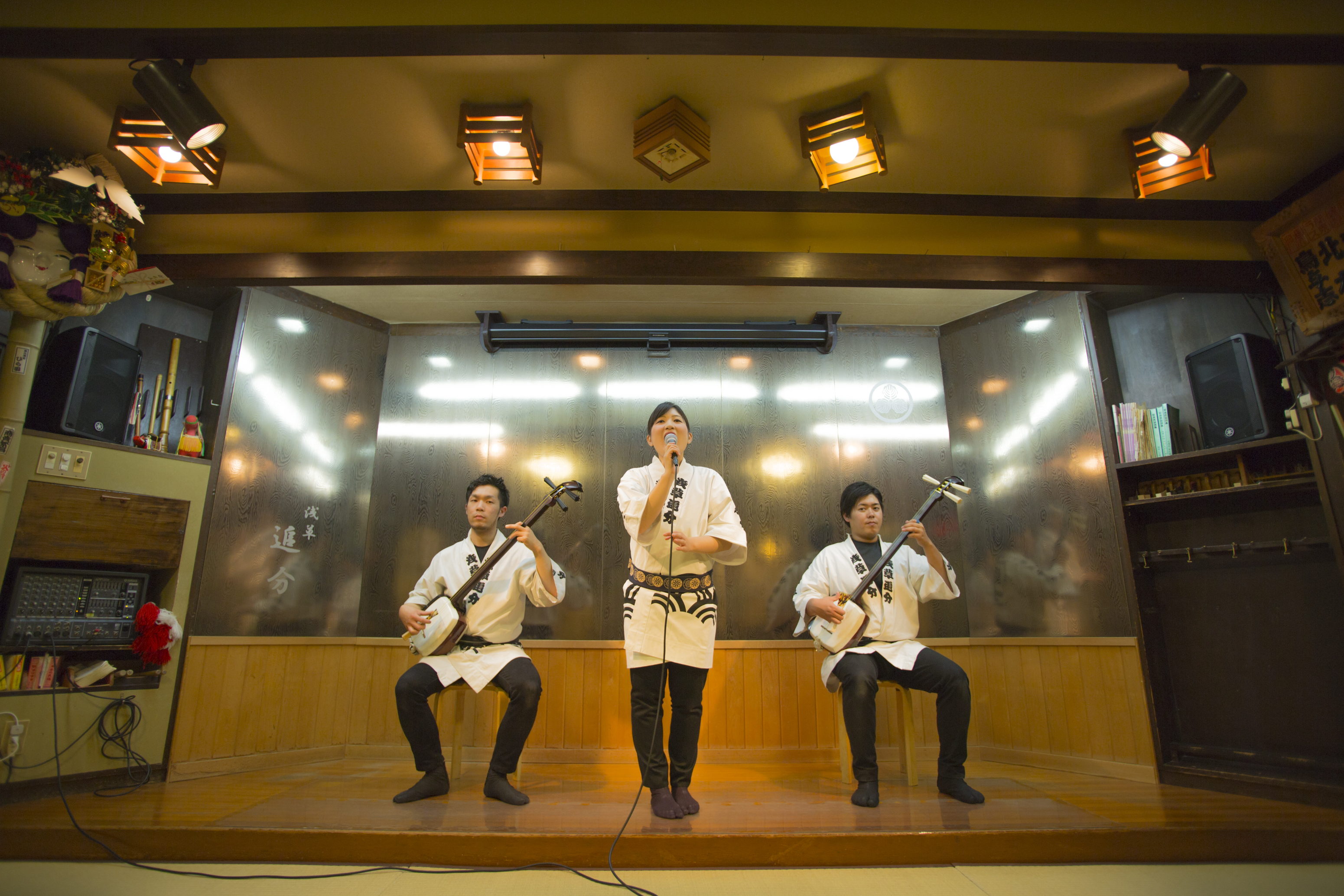 After performing the performers mingle with the customers and this is just one of the charm points of OIWAKE.

Even though they interact so familiarly with the customers, they actually hold an impressive career history.

Champions and prize winners of folk song, dance and music competitions who have performed across the country mix with the crowds and when they take to the stage you will be able to witness their powerful performance. 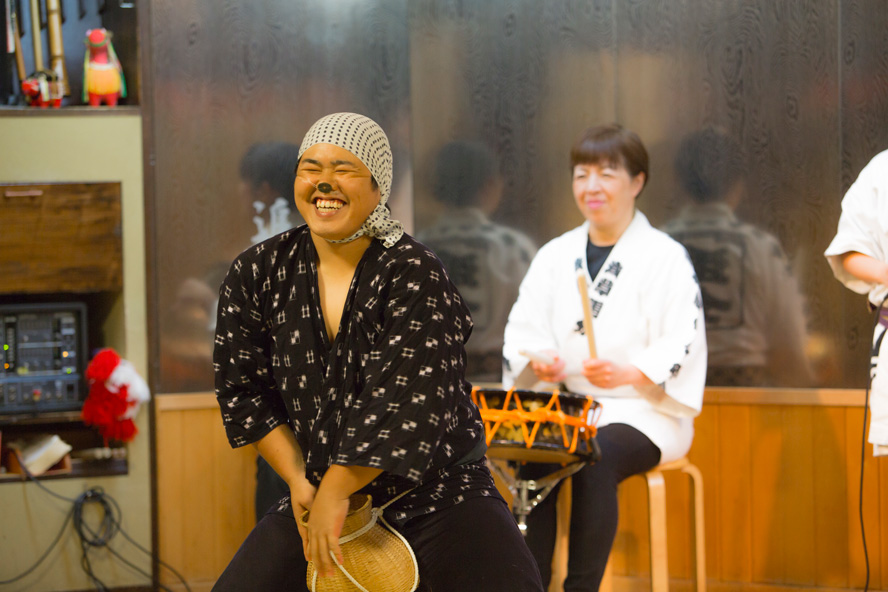 Ryuki Ando, who dances Dojo Sukui, is another youth who became familiar with folk songs since childhood. His career history shows he became the Japanese national champion along with his older brother Tatsukawa Ando.

“Most of our performers became familiar with the world of folk songs or music in general from a young age. Many of them have parents and grandparents who also have connections with the folk song field.

Many of them are also performing on TV, radio and other stages, not just at our bar.“

In its long history since this place was founded around 60 years ago, the way to enjoy musical performances has changed a lot in recent years. 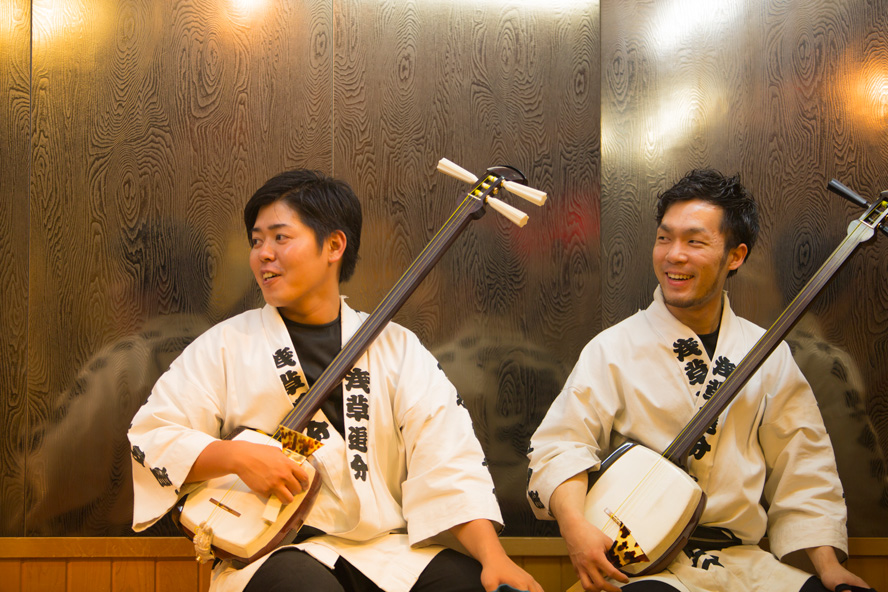 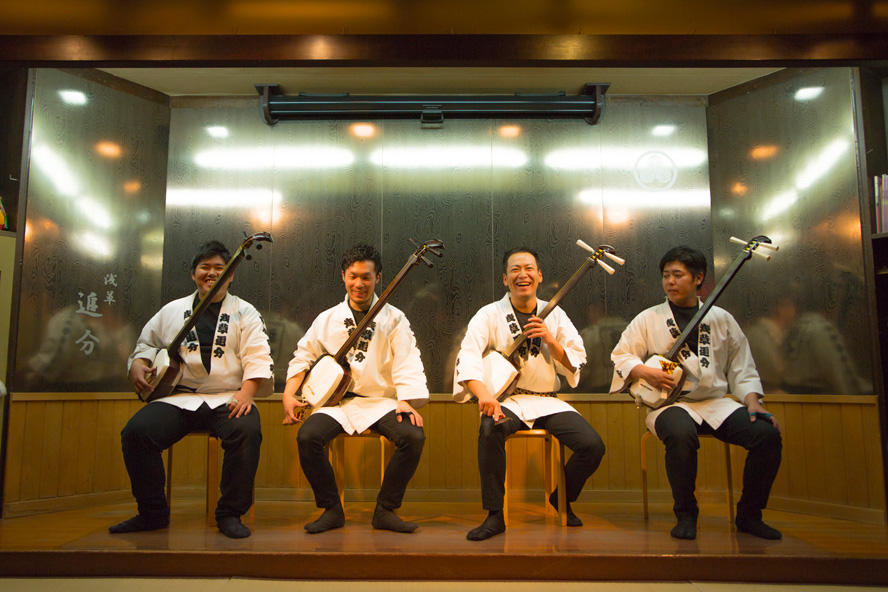 The one who increased the Shamisen performances was Ryoichiro Yoshida (The eldest of the Yoshida brothers who has lived and worked in OIWAKE since he was 18 years old.) around the time that he debuted.

Before that it was not like “Shamisen! I’ve been waiting for you!”, but more like they both played some pieces as an extra (lol). Now though, we play on stage in groups of 3-4 sometimes as many as 5 people.

Currently, not including myself, there are 12 other entertainers, but 10 of those members are Shamisen performers. since the Shamisen boom started many young people have come to watch the performances.

Most likely many of the customers who do not know folk songs have come to enjoy the Shamisen performances.“ 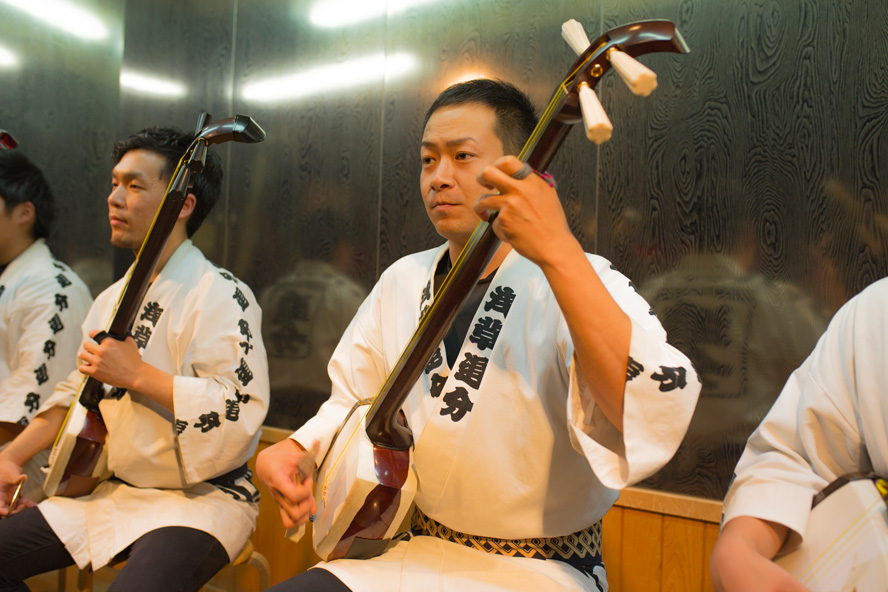 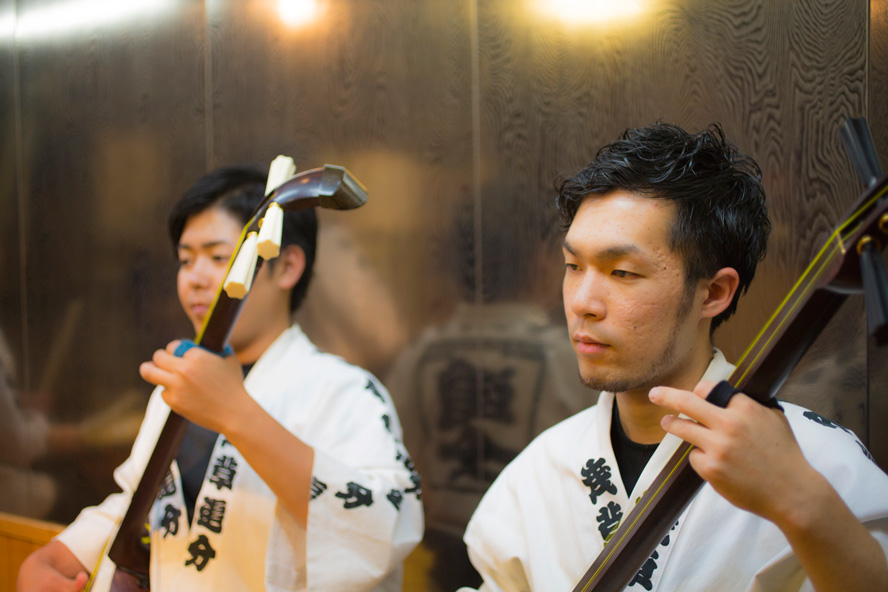 The average age of the musicians are young, in their twenties.

The personality of the performers shone during their solo performance time.

While continuing the old “songs” and performing “modern performances” which the younger generation can enjoy, young musicians with a future ahead of them challenge “tradition” and polish their “art”.

Folk song bar “OIWAKE” is a bar where people can spend time enjoying “songs” and at the same time it is a crossroad where young people can discover and become passionate about tradition.

In addition, it is a place where many young talents have been raised.

The Yoshida brothers who ignited the Shamisen boom, Abe, Masanori Tsubaki and others musicians in the folk song field train at OIWAKE and challenge performing on the stage in succession and expand the range of performances. 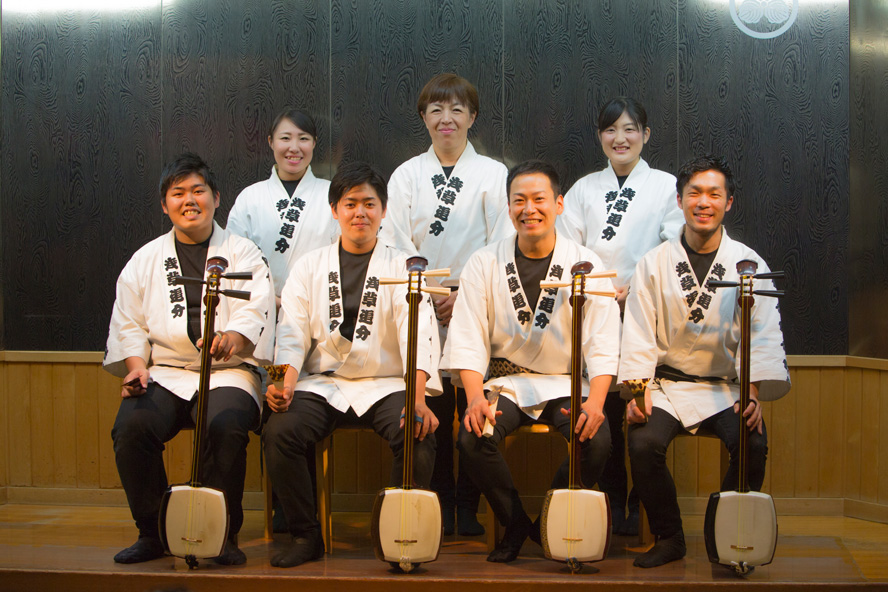 What are the charms of folk songs?

Finally, I asked the senior hostess about the charms of folk songs.

“You can recall the town and environment where you were raised. What is sung in folk songs is usually about daily life such as celebration or hard work (such as pieces that were passed down from farmers, fishermen and lumberjacks).

The lyric writers and composers are mostly unknown. I think the fact that you can get a feel of the accent peculiar to that country is one of the charms.”

They aren’t only the work of one individual, but the world of these “songs” have been expanded and raised in various areas.

“There are many many more folk songs. There are countless songs have yet to be dug up or aren’t widely known.“

According to the survey in Showa 62 (1897), around 58,000 folk songs were in existence. I wish to for those “songs” in the vast database source, which have been carefully polished, to be reproduced and be fully appreciated. 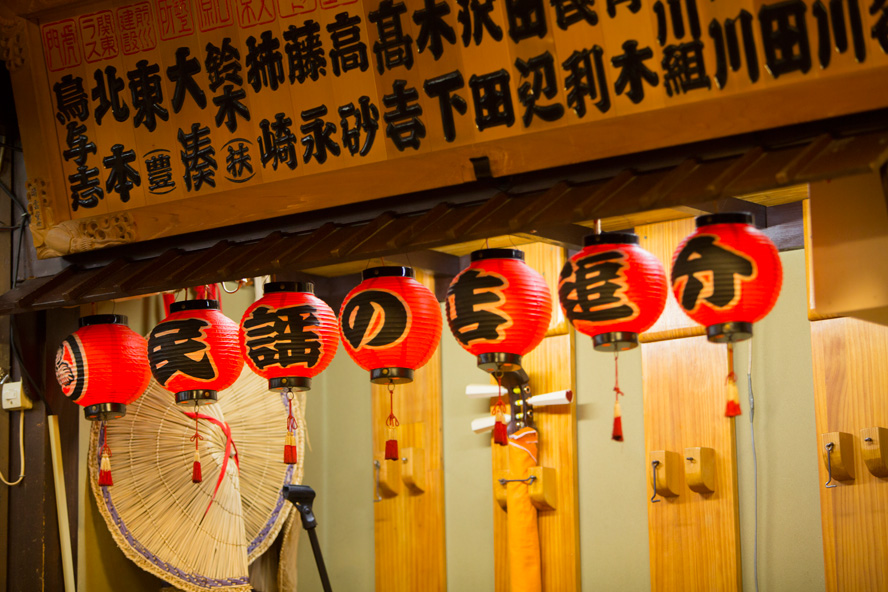 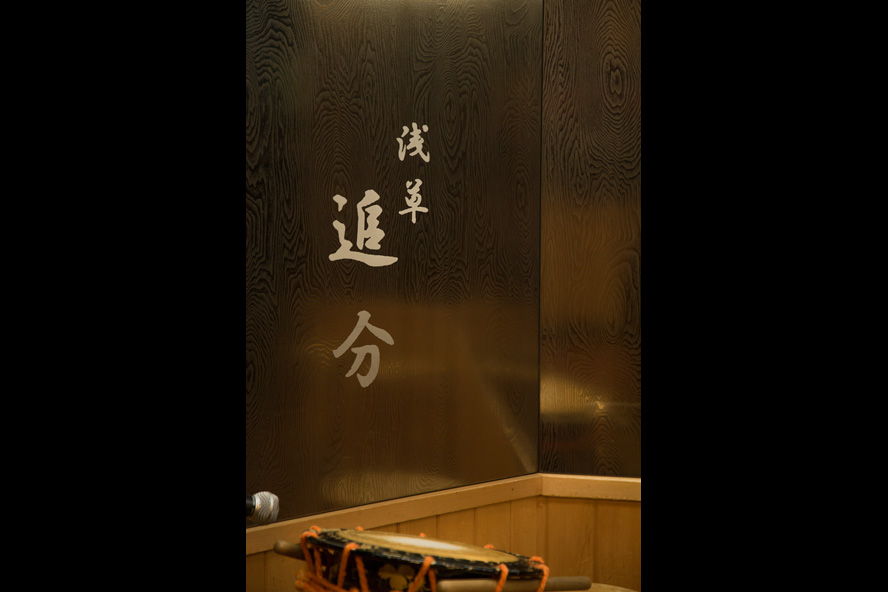 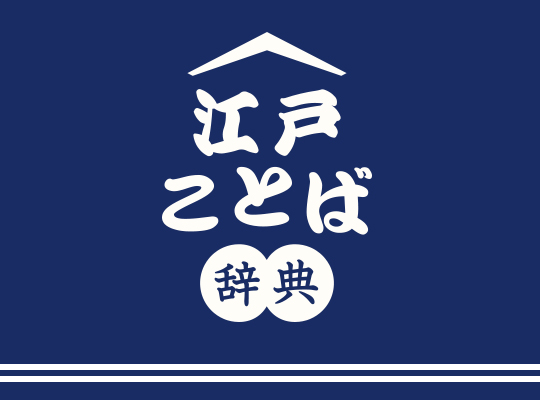